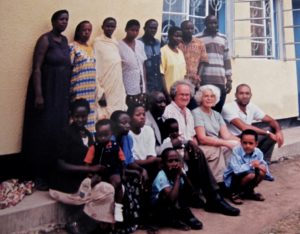 Donovan (seated on far right), Prue and Tom with locals outside Bahemuka House

KICS was founded by Donovan Chamberlayne, his mother Prue and her husband Tom Wengraf in memory of Donovan’s father, Professor Matarare Bahemuka, who was shot dead in Kampala in April 1988 during a robbery. He had been brought up in Bushenyi, in South-West Uganda, before training as a doctor at Guy’s Hospital in London.

Soon after he and Prue met in London she began a teaching job in Zambia, so for a while they conducted a long-distance relationship.  By the late 1960s he and Prue were together in London, and Donovan was born in 1971. Professor Bahemuka completed a DPhil and then trained as a neurologist at the National Hospital for Neurology in Queen Square, London.

He then worked in Kenya and Saudi Arabia, though his ambition had been to open a neurology department in Kampala. But these were difficult times in Uganda, under and following the leadership of Idi Amin.

As well as practising medicine and doing research, Bahemuka (as he was always known in the area and to friends and family) owned a farm in Kanaama and was trying to develop it:  he took Donovan to visit the area only three months before he was murdered.

Soon after his death three relatives and two neighbours were shot dead by soldiers in Kanaama. Bahemuka was buried in the garden of his house there.

In 2007 Donovan, Prue and Tom decided to go to Kanaama to arrange a headstone for Bahemuka and his mother. They were given a tremendous reception by the local residents, who set up awnings, provided food and were eager to meet them. It was Tom who first suggested developing this remarkable experience into a project to help volunteers to visit and get to know the area, staying in the family farmhouse, now known as Bahemuka House. Prue says that in the beginning they thought of themselves as a travel company. People from some fifty different local organisations came to discuss how they could use volunteers. As the family and visitors deepened links in the local community, they saw much poverty, especially among women struggling to improve their livelihoods. Generally, women do not hold land title so they have limited access to credit to develop farming and businesses. But with the effects of the HIV/AIDS epidemic, women are often the sole providers for their families.

Volunteers raised money for community projects, and Prue, Donovan and Tom registered KICS as a charity in the UK in 2009. They were keen not to set up a dependency between KICS and local people, and for activities to focus on building capacity through training and business support. First they raised money to make credit affordable for women. This fund is now called Kanaama Interactive Microcredit (KIMC). Training aims to improve farming techniques and building fuel-efficient stoves preserves resources and improves health. KICS is researching better water storage, both for health and farming.

The programme of mainly young people coming from Europe to volunteer has gradually been wound down. We now focus on enabling local people to better their lives. In 2011 a link group, KICS Uganda, was set up in Uganda. It is a registered community-based organisation with an active board. Collaboration with Mbarara University of Science and Technology and St Francis Counsellor Training Institute, also in Mbarara, has been of outstanding value to trustees, staff and local communities.

In 2013 local people and international volunteers set up a welfare and education programme for orphaned and vulnerable children which has become known as RONCO or Rweibaare Orphans and Needy Children Organisation, after a local group which oversees the programme. This supports children whose households struggle to feed and educate them. The children have often been left in the care of older relatives.

In our work providing microcredit, KICS often meets women who cannot read and lack the confidence to take out loans. With grant funding in 2015, we started Women’s Empowerment Through Literacy Learning, or WELL. This harnesses the resources, knowledge and skills of the local community in circles of between 20 and 30 women to build literacy.

Our most recent programme, the English Language Scheme, was established in 2016. English is essential for children to progress to secondary school, and this Saturday scheme boosts their reading, writing and speaking. The children enjoy the interactive teaching methods and teachers are also learning new skills.

Our objectives, vision and mission

KICS’ charitable objectives are defined in its 2009 constitution as:

We aim to contribute to community development by providing finance and human resources, by sponsoring research, and by acting as an umbrella or resource body.

KICS’ vision, Kashare sub-county without poverty, its people in good health and with universal education.

KICS’ mission An integrated multi-sectoral development programme focusing on the needs of the poorest and most vulnerable through capacity building, education and welfare.